Grandmaster Laing feels that Emperpor's Long Fist (ELF) is an excellent system for students of all ages. Many older students come to Tai Chi for its health benefits.  Some students train ELF for its combat and self-defense capabilities.  Still others, like the aesthetic beauty and grace of the forms and movements.  There is truly something for everyone.  Grandmaster Laing teaches students within a large range of age, skill, and physical conditions.  Laing points out to students that "You start where you are at."  This means it doesn't matter what your physical conditioning is when you start training.  The goal is to progress.  You progress at your own pace.  Grandmaster Laing uses his "progressive method of teaching" when teaching all styles of martial arts.  He shows students a basic, intermediate, and advanced way of performing techniques, depending on the student's physical conditioning. This opens up martial arts training to a larger audience. This allows students who may come to ELF as part of physical rehab to train alongside other students who are pushing themselves to achieve their top physical potential. 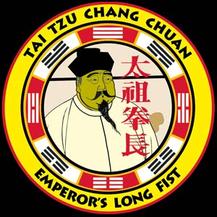 These "internal" arts help to develop the inner strength and relaxation essential for proper self defense.  Thousands of Chinese and a growing number of westerners also practice Tai Chi.  The internal arts can provide aerobic exercise, increased flexibility, and increased health and longevity.  This art was formulated using all of the principles of the Wutang and Shaolin schools.  Almost all Northern and Southern styles were derived from the Emperor's Long Fist.  We have a proud lineage in this art, traced directly to the Chao family for over 36 generations.

The Academy offers Emperor's Long Fist.  The art was founded by the first emperor of the Sung dynasty, Chao Kuang Yin. "Tai Tzu Chang Chuan" or Emperor's Long Fist covers all aspects of Tai Chi Chuan, Hsing I, Ba Gua and Northern Chinese Gong Fu.  The emperor had a keen interest in the martial arts and is credited with collecting all available documents and manuscripts on the subject including those from the famed Shaolin temple.  It is said that these manuscripts were stored in a tower behind the Shaolin temple. When the temple was destroyed, most of the records were lost. Fortunately, much of the art was passed on and lives today.